The Coastguard New Zealand Board governs the strategic direction of our national office.

The composition of the Coastguard New Zealand Board is: Bennett has been volunteering for Coastguard Auckland for seven years and has held a range of different operational and governance positions at a unit, regional and national level. A current CNZ board member since 2020, Bennett was also a Coastguard Northern Region Board Member & Chair of the Governance Committee between 2016 and 2019. An active volunteer, Bennett has acted as a Lead Radio Operator, is a Master of Lion Foundation Rescue & Trillian Trust Rescue, and is also a Coastguard Instructor and Regional Instructor/Assessor.

Bennett is a professional director and advisor specialising in governance, strategy, transformation / innovation and executive mentoring. Over a thirty-year career he has worked with many organisations in the public, private, charitable and volunteer sectors. As CNZ President, Bennett is passionate about continuing to build strong relationships throughout the organisation and sectors of society, understanding that units reflect local operating conditions and their volunteers mirror the people in their local community. Carolyn has been volunteering for Coastguard Canterbury for nine years and in her time has held a range of positions at a unit, regional and national level. Her most recent feat, becoming a member of Coastguard's Māori and Pacific Advisory ropū, Te Pūhara Mana Iwi which includes board members, staff and volunteers. Carolyn has a background in both Finance and Government and is passionate about Coastguard's people and embracing culture in both behaviours and the Coastguard brand. Over his four years with Coastguard Maraetai, Bob has held a number of key roles including Skipper, Vice President, and Coastguard Instructor. Bob is a chartered member of the Institute of Directors and has been an independent director of Theta Systems for the past 12 years. Bob is the co-founder of one of New Zealand’s first web development companies, Clearview Communications and the telecommunications company FX Networks. Jerry has been a volunteer with Coastguard Kapiti Coast for the past seven years, serving across numerous roles including President for three years, acting Treasurer and Unit Safety Officer. He is currently working towards his Coastguard Instructor and Master qualifications. Across large organisations in both the UK and New Zealand, Jerry has strong demonstrated experience in IT, organisational design and organisational resilience. Andrew has been a volunteer for six years, firstly with Coastguard Canterbury and now with Coastguard Nelson. Over this time, Andrew has served numerous roles both at local Unit level (Unit Vice President. CRV Senior Crew & CI) as well as nationally as Director (Chair) of Coastguard Boating Education. Andrew is currently a director, chair or trustee of several companies and trusts including Ngāti Apa ki te Rā Tō, Nutrient Rescue, Mountain Valley Honey, Coastguard Boating Education and is a Commissioner for the Minister of Education.​ 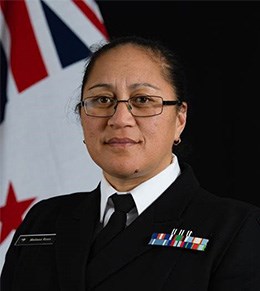 Commodore Melissa Ross joined the Royal New Zealand Navy in February 1993 as a Marine Engineering Officer, serving in HMNZ Ships Manawanui, Southland, Waikato, Wellington, Te Kaha and the Logistics Ship, Canterbury. Commodore Ross has held a wealth of positions throughout her years in the Navy, ranging from Private Secretary to the Minister of Defence, to the role of Navy Engineering subject matter expert within the Logistics Change Project. Most recently however, Commodore Ross took up her current role as the Deputy Chief of Navy in December 2019. Commodore Ross lives with her husband and two sons in Wellington and enjoys watching her sons play soccer, basketball and touch rugby. With his own first-hand experience as a volunteer, Danny understands the challenges faced by volunteer organisations in Aotearoa when tasked to do more with less resources. Until February 2021, Danny had been the Chair of Water Safety New Zealand for five years and has recently been appointed to the Fire and Emergency New Zealand Board. Danny has a genuine interest in frontline rescue services and brings a strong skill set in legal expertise, governance experience and diversity of thought to the Board. Danny understands the cultural dynamic of Te Ao Māori and Crown/Māori relations and brings cultural competence to the Board. Liz is currently GM of a portfolio of growth products at Spark, having spent two prior years as the organisation’s GM Group Strategy. Liz has experience in a wide variety of organisations from new start-ups (Liz was the founder and owner of a premium honey business) through to leading strategy and significant transformational change in large organisations. Liz brings extensive experience in collaborating with Boards and other key stakeholders – particularly in relation to the development and implementation of strategic plans. Liz has a deep understanding of complex stakeholder relations having worked as an economic advisor and consultant to governments and other parties in New Zealand and internationally. Liz is mum to Conor (8) and lives in Auckland. Susan is well-versed in not-for-profit organisations: she is currently the Chair of DiversityWorks NZ (Equal Employment Opportunity Trust) and before that was the Chair of the YWCA. Susan is currently working with the CEO and Board of Zespri to review their global remuneration and mobility strategy. Following the sale of her (co-owned) consulting business to EY in 2018, Susan was a Partner in the firm for several years. During this time, she advised and interacted with Boards in a wide variety of organisations and industries on people-related strategies. Susan then went on to become Fonterra’s Director of Talent and Engagement. Susan lives in Mt Manganui with her husband, Graeme, and has 3 adult sons.